The patter of their feet woke me up from my afternoon nap. Karthikeya was nudging Shruti. “She has a doubt”, he announced.

I smiled and nodded for her to ask.

“I have to write an essay on Gandhiji as homework and I wanted to ask if you ever met him when you were a child”, she said in a tense rush of words. I laughed and gathered her into my arms as a memory of me asking a similar type of question to my father popped into my head and said, “I never met him but I do know a very interesting story about him. It involves my father, me, and Gandhiji.”

“Do tell !” Shruthi said as Karthikeya gathered around me with interest.

I leaned back and started remembering the event in my memory lane. I had a similar predicament with homework and I was stuck on what to write about Gandhiji.

I was doodling randomly on the floor when Nanna’s* shadow fell over me.

“What are you doing instead of homework?”, he asked in a chiding manner.

“I am unable to write anything about Bapu. I seemed to know so many things but I am unable to recall anything”, I said with a dejected tone.

Nanna laughed and pulled me onto his lap and brushed my hair with his palm.

"I know a story. It involves me and Bapu. Would you like to hear it?", he asked.

I nodded hard as my father started his tale. "It was during the time before Independence. Bapu used to visit Andhra a lot of times due to his disciples like Pingali Venkayya Garu, Potti Sriramulu Garu, and Tanguturi Prakasam Pantulu garu".

Tanguturi garu had recently helped expand a library, Saraswathi Nikethanam in Vetapalam. Bapu was invited to the opening. In those days, I used to go to the old library to read books and update myself on the news. As I was a regular, I was informed of the expansion and went that day to see it. I was leaning against the pillar of the new building when there was a rush of people. As I peeped over the crowd, I saw the sight of a man in spectacles walking with a purpose and his famous stick. As I was seeing him approach the building, his stick hit a rock and the tip broke. I rushed forward and picked it up from the ground and gave it to him. He nodded in thanks and said, “Tumhara naam kya hai beta?". I said it to him in the silence of the looking crowd. He smiled and patted my back and went ahead and inaugurated the building.

I never saw him again but till now, I can feel him patting me on my back and his voice as he said my name to the crowd”, nanna sighed and smiled as he ended the story.

I was looking at my father with awe. He laughed at my expression and added, “You know, that stick is still there in that library. Bapu donated it to the building”.

"Really? Can we go and see it one day?”, I asked with excitement.

"Yes, but only if you finish your homework quickly. Now let me go and talk to your Amma”, nanna said as he stood up and left.

As I got back to the present from memory lane, I looked at my grandkids. Shruti and Karthikeya were listening with open mouths and wide eyes as I finished my tale. “And that’s how your mutthatha* met Bapu”, I said as Shruti slid off my lap.

Karthikeya broke the silence, looked at me, and said “Mutthatha was so cool”, as he struggled with pronouncing the word. Shruti nodded vehemently in agreement.

I laughed and hugged them and said, “ Now go and finish your homework” as they ran back to their rooms. 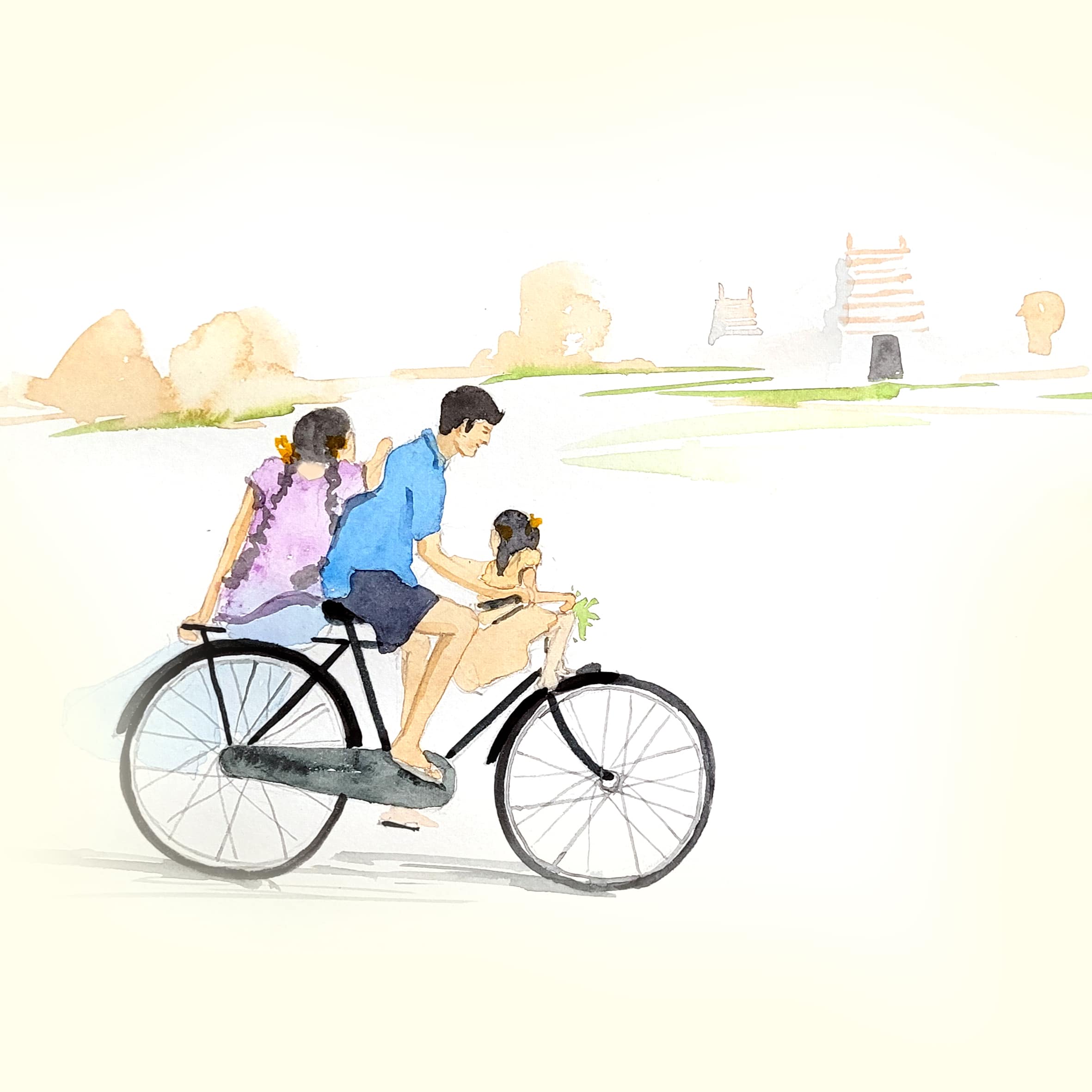 I sat there smiling on the balcony enjoying the festive mood. My grandchildren are preparing their bicycles for Ayudha pooja with their grandfather. “Sit and try to balance yourself, Karthik”, I heard my husband encourage my grandson to cycle. And, this reminded me of my childhood. The memories of us performing ayudha pooja, our heartful talks and giggles, and the delicious prasadam!
read more
next story
History of Pickling 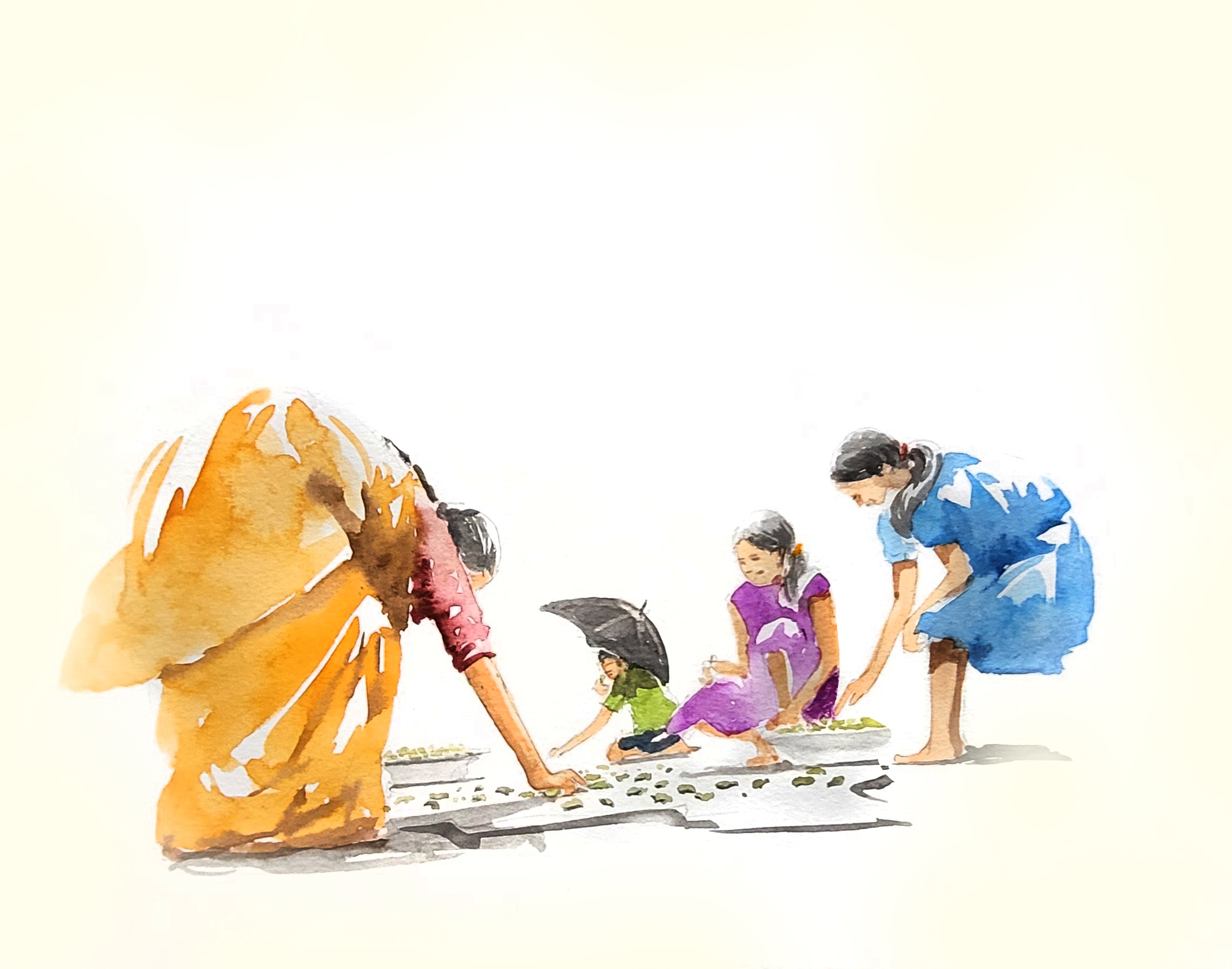 Summer mornings and sun-drying activities on the terraces are inseparable. Let's swim through the memory lanes of Grandma and know history of pickling from her perspective!
read more
more
search
explore
cart
account
Return, Refund Policy